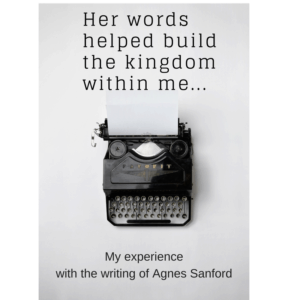 I’ve only recently met Agnes Sanford. At first, I disagreed with her so vehemently on a certain point that I nearly gave up on the relationship before it had begun. But I sensed that she had much more to say that I needed to hear, and that I could learn from her, so I continued to listen.

For one thing, I realized by sticking with Agnes long enough to hear her explain her entire viewpoint, that the reason I had so vehemently disagreed with her at first was that I had interpreted what she initially said in a different way than she actually meant it. By being patient enough to hear her out, I realized that what I originally thought she meant wasn’t at all what she was saying.

It reminds me of that old Alan Greenspan quote:

“I know you think you understand what you thought I said

but I don’t think you realize that what you heard is not what I meant.”

You might be wondering what was going on, since Agnes Sanford has been gone since 1982. A book, of course.

I was reading Agnes Sanford’s book Healing Light, and I was reacting to Agnes’ take on the Christian view of Paul’s thorn. (It’s too much to go into here, and I’m pretty sure you’ll be seeing more about this encounter in my next book, but if you just can’t wait, you can read her words for yourself in her book.)

Even after I grasped her concept, while I still didn’t entirely agree with her, I could definitely at least see things from her perspective, and I was curious. The opening that had been created in my understanding let in more peace and more light than I had previously had on the topic. It’s not every day that happens, so I decided it was well worth sticking around for a little while longer. So I read the whole book.

And then, after I finished reading Healing Light, I had the sense that there was a lot more that Agnes knew and hadn’t said in that book, and I wanted to know what it was. I already had a copy of her autobiography, Sealed Orders, so I immediately launched into that book. Well, that’s the one I wish I had read first! I’m pretty sure that I wouldn’t have come so close to chucking her if I had known how she had arrived at her ideas described in Healing Light. But, that was water under the bridge. I was here now.

What a book. Sealed Orders is the story of a writer, a woman, a pray-er, and best of all, someone who expected her Christian faith to grow and who constantly held spiritual ideas in tension and watched for God to guide her. Once she received God’s Spirit, she lived by the Spirit.

A Writer, On Writing

I found especially interesting her tracing of her development as a writer, and how the various aspects of her full life—which sometimes appeared to her to be detours from writing, obstacles in the way of writing, or complete roadblocks to writing—in fact seem largely to have formed the very material that became her oeuvre.

I also appreciated her many insights into her own writing process. (In fact, I’d recommend the book to any writer, on that point alone.) One of the most beautifully described aspects I immediately recognized as true. Sanford described how the Christian writing life strengthens the writer and the Kingdom of God within:

“… when I write, the inspiration comes from God, but it comes into my own mind and is not immediately dispersed to others. Therefore, I myself am fed and recharged with life, and even if the conscious mind and the body are weary simply from the work of concentration, the inner being is deeply comforted and strengthened. When I write, I am in my own way rebuilding the Kingdom within….”1

Just one beat later, she continues:

“I build the Kingdom within through constant prayer and listening. In fact, in writing novels I hear the words my characters speak, and I see their movements, and simply write down what I see. This, however, does not mean that the writing is perfect! Far from it! Never, so far as I know, are we relieved of the responsibility of using our own minds.”2

Well, now Agnes is treading on my holy ground. I recently wrote about the difference between me at work creatively and Christ working in me, and brought in some thoughts from Dorothy L. Sayers on the topic. So I was especially interested in how Agnes Sanford continued describing her process:

“It is still necessary for a writer, no matter how inspired he may be, to develop and use to the utmost his critical ability. One does not do this in writing the first draft, for that would stop the flow of creativity, but after it is finished, then the more laborious part of one’s work begins. Then one deliberately turns the mind over and releases its critical aspect. One becomes an editor rather than merely a creator, and one probably rewrites and corrects many times….”3

Indeed. As if God has said to the writer, “Here is the clay of ideas I have selected for you to use; take it and fashion it.” And the writer will be enlivened by the Holy Spirit to do so, but there is a style, a perspective, a voice, that is her own. She has been made by God, so of course any work she dedicates to his honor will also bear his imprint, but he has given her her own capacity for shaping and making an imprint on it, as well.

Am I Still Dead?

How does this mesh with my former question about being dead and Christ working through me? Before I give my own response, let me say I think I have recently discovered how Dorothy L. Sayers might weigh in on the conversation at this point if she were still alive to do so. Sayers wrote (albeit, on another subject):

“In this matter, as in so many others, Christianity displays its usual propensity for making everything as awkward as possible. It outrages the tidy-minded by occupying a paradoxical position.”4

Oh, Dorothy. Not to put too fine a point on it.

I think the answer is that even though I am dead5, yet I live—a living which includes writing—because I have been raised and am alive through believing in Christ.6,7

And I have to tell you, after reading Sealed Orders, I’m feeling a lot more raised, because Agnes Sanford’s story helped rebuild the Kingdom within me.