“I’m Coming to End the Lies”

I’m not the typical superhero movie fan. I’m married to the fan. And so, as we settled into our seats in the theater to see Captain Marvel, I said, “Okay, give me the Cliff Notes version of what I need to know to not be totally lost while I’m watching this movie.” He concisely got me up to speed on where this movie fits into an overarching story, and how its characters relate to the genre’s pantheon. A couple of minutes later, I was ready to watch the movie.

And more than usually expectant that I would find something in the story.

I used to sleep through all of these superhero movies. For real. The visual stimulation was too much and so I would have to close my eyes during many scenes. The next thing I knew, I’d be nodding off, especially if I was wearing a breathing filter mask. But more recently, I’ve been able to watch entire action movies with my husband without having to close my eyes so much. (Except for that crazy scene with the red blinking lights in Incredibles 2. What were they thinking?) As a result, I’ve been awake for several of the more recent superhero movie releases.

And thanks to my reading in the last few years of C.S. Lewis, J.R.R. Tolkien, and others on the topic of myth, I am open to appreciation of the story inside, and above, and overlaid upon, story. And so that is typically what I am now looking for in these superhero movies. For example, when we saw Aquaman in January, I came away having seen not just a story of a fish-queen and her half-human son, but a creative reiteration of the Messiah story.

And so, when I say that I was expectant that I would find something in the Captain Marvel movie, I don’t mean that I thought this was going to be a great movie; I mean I was expectant to find the story inside, and above, and overlaid upon, story.

And I was not disappointed.

Carol Danvers is a human following her dream of flying jets and trying to do something good for the world. When her plane is shot down, killing her co-pilot and mentor, and leaving an important piece of technology in imminent danger of falling into enemy hands, Danvers attempts to destroy the technology using a sidearm. But in the resulting blast, energy from the technology flows into Danvers’ body, and she is knocked to the ground, unconscious. The enemy aggressor, who has witnessed the power surge, captures her.

The enemy then either causes or takes advantage of Danvers’ memory loss and tells her an entirely different version of events. In his story—all a lie—she is a member of his race of being, the Kree—not human; he rescued—not captured—her; and he—not the power surge from the technology—gave her an unusual power that manifests in her hands. She is made to believe that her new power comes from a small disc device on her neck given to her by her Kree master.

In truth, the little device on her neck greatly diminishes her power. But there is no way for her to know that yet.

Posing as her mentor and comrade, her enemy captor trains her to fight in hand-to-hand combat, always admonishing her against feeling her emotions. He spins another layer on his web of lies, misdirecting her frustration at her inability to beat him by telling her that her emotions are the reason she can never beat him in combat.

As the story unfolds, however, Danvers slowly discovers the truth. She learns who she really is, she remembers what actually happened, and she realizes the web of lies that has held her captive.

Just as Danvers is about to get completely free, her enemy tries one final lie to keep her ensnared: he tells her that he gave her her power, and that he can take it away.

But Danvers discerns and speaks the truth about that final desperate lie: she has been fighting with one hand tied behind her back. She rips the small disc device off her neck—the one the enemy had told her gave her the power in her hands. Immediately, her power increases exponentially throughout her entire body. The device had been limiting and diminishing her power, but now that she is free from it, she has the use of her full power—and it is significant.

As Danvers moves forward with setting things right, a scenario unfolds in which she falls through the atmosphere from a great height, plummeting toward the surface of the earth. At first she panics, her body scrambling in its freefall. But then she appears to realize something. She becomes calm and still, even while she is still falling, and that is when her power manifests in a way that makes Danvers able to glide. She can now fly.

Finally, in what could have been a showdown scene with her former captor, Danvers shows him mercy. Instead of killing him, she tucks him into a rescue pod and sends him home to his leader, a being called The Supreme Intelligence, with a message:

“Tell the Supreme Intelligence that I’m coming to end it. The war, the lies, all of it.” 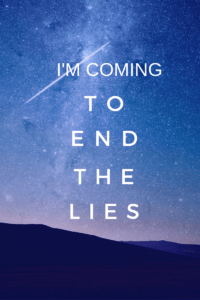 And it was then that I cried. Right there in the movie theater. Because that is my story. And my mission. Every one of my upcoming books is being written and published to end the lies. To end spiritual battles for people who haven’t been healed. To reveal and break lies that have held believers captive for far too long because they thought it was the truth. To set people free.

And, somehow, I have also taken the device off my neck. A few weeks ago, I finally recognized and exposed a lie that I had inadvertently believed, and one that had been holding me back. God’s power was freed to work fully in me. I am no longer restrained by believing something that is not true. And I am ready to experience what God’s full power working through me can do.

I can do all things through Him who strengthens me. – Philippians 4:13 (NASB)

I am on a mission, and I no longer have one hand tied behind my back. I am coming to end the lies.

Get updates on my upcoming books, plus other exclusive content. Subscribe to my monthly emails at amylu-riley.com/subscribe.