In the cold early months of 2018, as I first read The Letters of J.R.R. Tolkien  (Edited by Humphrey Carpenter, Mariner Books, 2000), an odd realization formed in my spirit.

It was this: that the yet-unpublished pages of what would later become The Lord of The Rings books were actual spiritual weapons in World War II—as they were being written. 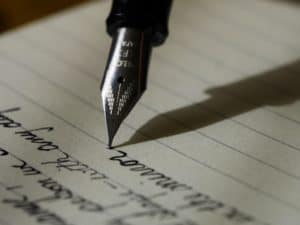 The expression of the ideas into words as ink on the page was the formation of a spiritual weapon that was vital to pushing back evil.

I had never before considered the idea or anything like it. Tolkien certainly never mentioned the idea, or even hinted at it. But as I read his correspondence—specifically letters written to his RAF-pilot son Christopher as the LOTR story was first being put to paper—I just knew that it was.

I could no more have explained how this was possible than “the man in the moon,” to quote my grandma.

At the time, I mentioned this to only one person. She said that when I told her, a shiver went through her. I knew how she felt. It was odd to have this piece of information. I didn’t really know what to do with it. But since then I’ve learned that it’s the other way around with truth: I don’t necessarily always have do something with it; truth does something with me. What I believe forms me, shapes me, guides me.

In this case, this truth—literature as a spiritual weapon—sat in the ground inside me, doing what seeds do in the dark, until I recently read The Power That Changes the World by Bill Johnson (Chosen Books, 2015).

I listened to the audio book as I steamed fresh greens in the kitchen on a hot summer day not very long ago. And I knew that I was hearing the next part of a message that had first come to me early last year, when it was 70 degrees colder outside and my spirit was a year-and-a-half younger in a million ways.

“Creativity is not a luxury item in the kingdom,” the narrator’s voice declared with finality. “It is essential. It is portrayed as a spiritual weapon of war in Zechariah 1:18-21.” 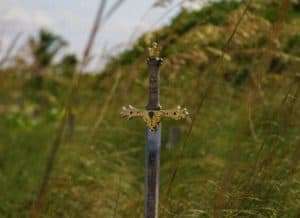 Johnson went on to explain his interpretation of the Zechariah 1 passage. “The four horns are spiritual powers set on destroying the people of God. God’s answer to that is really quite surprising: he sent craftsmen. These craftsmen were the artistic ones. The creative ones who helped design and define the nature of the world their city was to enjoy. Not since God had sent a choir out in front of an army going to war had he done something so unreasonable. Or so it might seem to those who don’t understand wisdom and realize that its root system is in another world.”

“Offering God our labors draws him into an environment in unusually powerful ways,” Johnson wrote. “Work can become an offering that he inhabits. …God uses our natural tools of labor and makes them eternally effective by turning them into weapons of spiritual warfare.”

– Bill Johnson, The Power That Changes the World

“God allows our sanctified labors to become supernaturally effective in destroying the purposes and works of the powers of darkness.”

Every word of it resonated with truth. My spirit and the Spirit of God confirmed that it was not only true generally, but it was true specifically. It was true for me.

I may not know precisely why I am led to write what I write. But I find that I no longer suspect that I might be generally flinging ideas into a shapeless and nameless sea of books and blogs and correspondence. I am sure now that these words are spiritual forces, formed to push back spiritual darkness, and empowered to expand the kingdom of God on earth—in the hearts and spirits of specific individuals.

AmyLu Riley is the author of Faith with Grit for the Not-Yet Healed and Stay: Why I’m Still Here, A Spiritual Memoir.